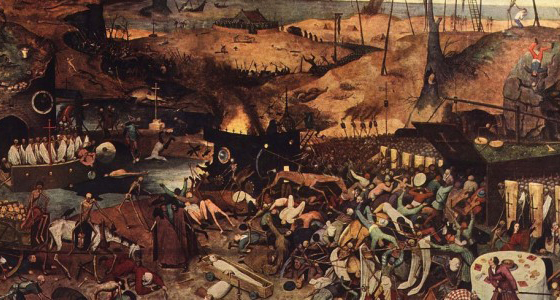 Februar 1, 2015 by admin In Publikationen, Reviews No Comments

The apocalypse is sexy – not in a literal sense of course, but academically speaking. Popular culture, for example, has engaged in an excessive amount of apocalyptic imagineering in recent years: From the fantastic portrayals of end-times due to the 2012 Mayan calendar, tidal waves, ice ages and so forth, to scenarios of a zombie apocalypse or alien invasion sweeping the globe – The End is nigh! Hollywood seems to shout these words out loudly and for all to hear. Consequently, academic research interest into the varied possibilities of apocalypticism has similarly flourished in a variety of academic cultures, from history to theology, from literary studies to anthropology. The research project on „Occidental Apocalypticism“[1], realized at the University of Vienna as a three-year project providing interdisciplinary cooperation for five PhDs and gathering research from four different departments, has taken up the challenge of providing a common ground for the many varied and somewhat discordant fields that deal with apocalypticism. The present volume, a „companion on the genealogy of the end times“ (as the subtitle reads) is the result of this work and the first anthology in a newly established book series on the „Cultural History of the Apocalypse.“ It brings together the findings of the Viennese project as a massive 765 page volume, with 33 articles (eight in English) that are grouped in six clusters, following the idea of a genealogy backwards from modernity to the Judeo-Christian origins in the 4th century. The first three clusters concentrate on modernity (eighteenth to twenty-first  [682]  century) and deal with „Apocalyptic Knowledge“, „Media Regulation“ and „Possible Worlds, Possible Ends“ respectively, the fourth cluster then focuses on pre-Enlightenment times (15th to 17th century) and „Apocalyptic Communities“, whereas clusters 5 and 6 reach back into medieval and ancient times (roughly 4th to 14th century), dealing with „Processes of Othering“ and „Competing Horizons of Time“.

As the editors (the five project members) make clear in their introduction, their approach is not to intervene in discussions of terminology and definition – these seem to bog down any research, in the end shattering any useful perspective on apocalypticism. The problem, Wieser et al. argue, is that terms such as „apocalypse“, „apocalypticism“, „end times“ and „eschatology“ are phenomena both on a „diachronic as well as synchronic level that are pluralistic, heterogeneous, and partly contradictory“ (12). Finding definitions is problematic, as the terms are rooted in their respective historical and cultural backgrounds, which change and overlap. Any academic negotiation of these phenomena thus promises results only if and when considered within this framework, necessarily providing „concretized perspectives“ instead of „hermetic unity“ (11). In keeping an open, interdisciplinary view, the editors are thus able to gather many different such concretized perspectives that together provide an multi-faceted (if incomplete) picture of apocalypticism. The only limitation they provide their contributors with is a topical concentration on the Judeo-Christian, occidental apocalypse and its appropriation in different cultural and historical frames – emphasizing reception, not conception.

Out of necessity with a project of this size and the sheer amount of articles, the quality and approaches of the articles are varying – some provide survey-like overviews on topics on as little as 10 pages, whereas others evolve specific readings of up to 30 pages in length. For science fiction scholars only the first three clusters seem directly relevant, given the modern historical dimension of SF as a genre (taking the Enlightenment as the origin point of scientific thinking) and the rather theological and/or philosophical orientation of the pre-Enlightenment, medieval and ancient clusters in the book. Out of the three modern clusters, „Apocalyptic Knowledge“ provides a theoretical commentary on the apocalypse, referencing and surveying key philosophical strains from Kant to Nietzsche. Robert Weninger, for example, ties the modern philosophical thought on the death of God to literary explications of the ‚Last Man‘ figure in early 19th century works such as Grainville’s Le dernier homme and Mary Shelley’s The Last Man, arguing for a paradigm shift in apocalypticism based in the secularization of the Enlightenment. Together with Eva Horn’s genealogy and literary overview of Romanticist notions of the apocalypse – from Jean Paul to Lord Byron – these two chapters form a literary nexus that establishes proto-SF in the larger theological and philosophical debates, thus providing SF scholars with valuable connection to Judeo-Christian apocalypticism.

Of more direct import to the SF scholarship, the two following clusters of „Media Regulation“ and „Possible Worlds, Possible Ends“ move noticeably closer to contemporary SF material. These articles discuss modern progress and its central role in the cultural negotiation of apocalypse, considering especially media forms and technological advancement. Jörg Trempler’s article, for example, provides a historical account of the interconnection between real (or realistic) catastrophe and fictional transposition, discussing its representation in different media forms  [683]  from the image-less news reports on the sinking of the Titanic to elaborate 1970s film scenarios of possible catastrophe in Earthquake or Poseidon. Frank Hartman gives an interesting (but unfortunately too short) overview of the apocalyptic discourse of computer technology and the cyborgization of the human. Tying both of these articles together, Christian Hoffstadt discusses the fictional and factual representation of technologically induced apocalypse in the form of global catastrophe, focusing on the contemporary issue of nuclear power and its threat potential – the catastrophic accidents of Fukushima and Chernobyl functioning as reference points for his discussion.

As becomes apparent in these short summaries, the science-fictional element of apocalypse is not central to the discussions in most of the articles of this anthology, though it is not missing either. The only chapter that discusses an SF-text in depth is Ingo Cornils‘ „The Matrix Preloaded: Rainer Werner Fassbinders Welt am Draht„, in which Cornils gives an in-depth reading of one of Germany’s very few internationally successful forays into SF-film. In his analysis, the film becomes a precursor to apocalyptic scenarios of shattered reality construction and a consequential escapism into virtual alternate realities, as imagined by films such as The Matrix, Inception or Source Code.

In sum, the Occidental Apocalypticism compendium is a thorough and varied account of the divergent approaches that interdisciplinary apocalypticism has brought forth in the last couple of years. For those interested in the theological, philosophical and historical dimension of this intriguing subject matter (if they are able to read German on a relatively high level, that is), this compendium is probably worth its weight in gold. Individual scholars of science fiction will find some interesting approaches and analyses that deal with apocalyptic proto-SF, as well as some chapters on the mediatization of, and technoscientific influence on the apocalypse, but these do not necessarily warrant the acquisition of the whole, rather pricey volume – making this a typical purchase for libraries and collections.

[1] All translations from German are mine.

This is the pre-published version of the review. For the original publication, please refer to SFS 41.3: