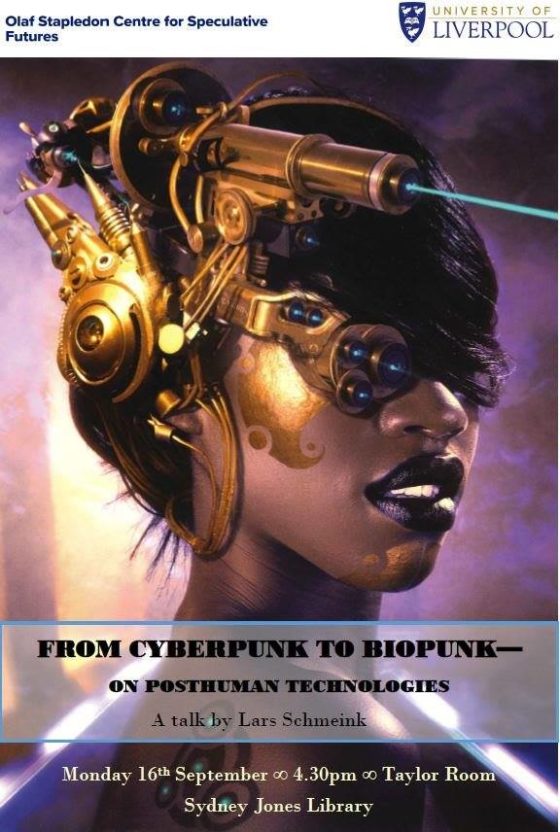 Talk in Liverpool at the Olaf Stapledon Centre, Liverpool

September 8, 2019 by admin In Blog, Veranstaltungen, Vorträge No Comments

From Cyberpunk to Biopunk: On Posthuman Technologies

In the 1980s science fictional imaginary, the future was saturated with invasive technology. Bodies were invaded by mechanical and electronic prosthesis, overcoming physical biological limitations and creating cyborg hybridity. Digital structures invaded the mind, opening it to new, virtual worlds that paralleled our own. Cyberpunk imagined a world in which bodies and minds were extended, transformed and hybridized with cybertechnology. Some thirty years onwards, we have – in a sense – become the posthuman beings that cyberpunk imagined: constantly connected with a virtual realm through visceral technology, able to replace the limited body with 3D printed parts, and challenging the concepts of what it means to be human. But cybertechnology is not the only technology impacting our posthuman selves. Since the Human Genome Project mapped our DNA in the year 2000 and now more than ever, has biotechnology replaced cybertechnology in becoming a dominant of the science-fictional imaginary. Genetic splicing, CRISPR/CAS, stem cell manipulation, virology, cloning and many more are at the core of our anxieties about the future. The talk will trace our technoscientific imagination, delving into what makes us posthuman, what makes us become-other, moving from the cybernetic and prosthetic transhumanist fantasies of 1980s cyberpunk to critical posthumanist interventions in hybrid and liquid subjectivities in our contemporary SF, or what I call Biopunk Dystopias.

Talk at the Olaf Stapledon Centre for Speculative Futures