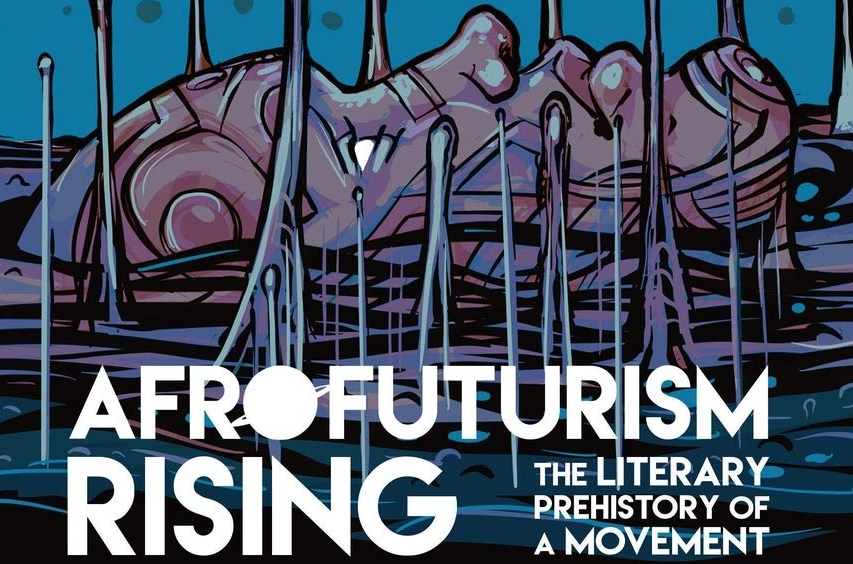 Further, American Studies is mainly included in English departments, teaching the US-side of language and literature to education majors and has to vie for too few tenured positions, often restricted to one scholar specializing in ‘America’. As a result, the field suffers from being rather conservative and consensus-thinking – driven by administrators looking for ‘broad knowledge’ and common ground to depart to future teachers. In consequence, more often than not works that emerge from this field are safe and uninspired readings of canonical texts that do little to further an understanding of literature and its significance within our current historical moment.

Why am I telling you all of this? Because the book on review, Isiah Lavender III’s Afrofuturism Rising: The Literary Prehistory of a Movement, is a shining example of what scholarship on canonical and historical American Literature could look like, if done right. To my eye, as a German Americanist, Lavender has produced an interesting and valuable study of the science-fictionality of early African American literature – an important book for everyone in SF studies to consider. But he has also produced an even greater book, a paradigm-shifting book for anyone working in American literature, as it not only showcases the value and relevance of early African American literary experience for today’s culture, but that re-reading it through an afrofuturist lens reveals layers of meaning beyond those that any generation of scholars could have seen before, because the science-fictionality of the works in question is being shaped by the continued injustice done to American blacks. Reading this book and thinking about its impact has become even more poignant, as America is burning while I write these words, and the President just invoked a law from 1807 to quell what he considers an insurrection: peaceful protest against systemic racism.

Interestingly, it is from this same vantage point, only a few years earlier, that Lavender starts his book. For him, the key to understanding the African American experience in the US and to unlocking the hope expressed in movements like Black Lives Matter is already existent in the earliest examples of African American culture, in its origins of enslavement and the double-conscious practices involved in living in the US while being black. In extending the concept beyond our current technocultural moment and its impact on African American imaginaries of the future, Lavender argues that afrofuturism represents “a set of race-inflected reading protocols designed to investigate the optimisms and anxieties framing the future imaginings of black people” (2). The focus is on reading not producing, and this allows Lavender to claim that many literary expressions of African Americans, from the slave narratives of the early 19th century to the folkloristic novels of Zora Neale Hurston, from Richard Wright’s angry depiction of systemic oppression in Native Son to Colson Whitehead’s recent The Underground Railroad can all be bound together in a “transhistorical feedback loop” (7).

In a bold move to extend the western concepts of technology and science to include non-western concepts such as a “black networked consciousness” (7) or “spiritual technologies” (31) such as conjuring and root-work, Lavender claims a technocultural language to explain how black experience have always been science-fictional. In six insightful chapters, he moves from a broad view of African enslavement and the employment of “freedom technologies” (25) towards the 1970s and its future of a racial conflict ending in war in John A. Williams’ Captain Blackman. The first three chapters each discuss different technological strategies of dealing with the hyperviolent realities of slavery in the 19th century: From the feelings of alien abduction when transported to strange lands, to literacy as a technological tool for freedom, to the creation of more favorable pocket universes as slaves hid out in attics and fled to northern states. In the latter three chapters, Lavender foregoes the broader view and focuses specifically on three central texts as exemplary case studies, extending the historic trajectory to include novels by Hurston, Wright and Williams.

All of these function as a direct link to contemporary African American experiences and visions of a future that guide actions such as the Black Lives Matter protests today. For example, an afrofuturist reading of Hurston’s Their Eyes Were Watching God reveals the alien-otherness of black experiences in a segregated South and promotes the literalized search beyond the horizon for a world that accepts and loves Janie, the novel’s protagonist. In this, Lavender argues, lies a utopian longing for a better future, which Hurston expressed in order “to value and humanize blacks”. In contrast, the afrofuturism of Wright’s Native Son is a radical challenging of racist stereotypes. In mercilessly showing us the forced identity, the black man become murderer and rapist, Wright uses his novel to challenge the construction of blackness as “a cyborg, an alien, and a monster” (Lavender 132). Lavender reads the novel thus a klaxon-call, a reminder to the black networked consciousness not to become the image of white stereotype and prejudices.

In conclusion, Afrofuturism Rising is an important study for science fiction studies, for American literature and especially for African American studies. It connects canonical texts with today’s cultural moment, revealing the long history of othering and oppression that has been plaguing America and it argues for the science fictional reading practice of afrofuturism as a means to understand the past. Moreover, it is this movement, from the past to the present, Lavender loudly proclaims, that allows for a way to think about the future through afrofuturism. It is only fitting then, that he wraps up the book in a gesture of expansion into time and space—by gesturing towards contemporary African American authors and by broadening afro-futurism to African futurism and inviting study into the many facets of black science fiction.

Ursprünglich erschienen in Foundation: The International Review of Science Fiction 136 (2020):