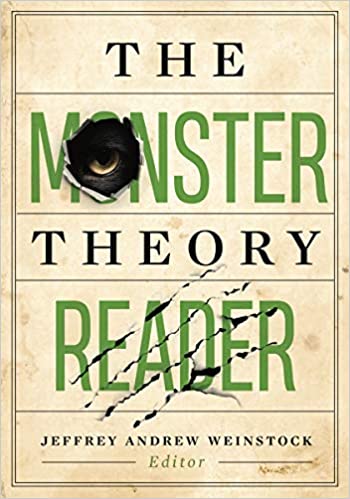 If you subscribe to the theory that Mary Shelley is a key figure in the genesis of science fiction, then it is only a small step to claim that the figure of the monster is as central to science fiction as it is to horror.

In fact, Vivian Sobchack has commented on monsters as the primary moment of “congruence between the SF and the horror film” at which it is hard to “make abrupt distinctions between the two genres” (30). Monsters can be found in science fiction; because SF pushes the limits of what it means to be human, it breaks down categories of human/alien or human/machine. And the monster, as a cultural marker, “is the harbinger of category crisis” (40), as Jeffrey Jerome Cohen points out in his “Monster Culture (Seven Theses),” the flagpole text of The Monster Theory Reader and the fulcrum of monster theory as an academic discipline. Editor Jeffrey Weinstock has chosen to place Cohen’s text before and outside the main structure of 23 essential essays that form monster theory, because it is the one text that “named a field” (1) and thus brought it into being. As Weinstock explains, monster theory might have been present in many different fields and approaches to a variety of texts, but it wasn’t until Cohen’s 1996 intervention that the field was named.

In his introduction, Weinstock then goes on to give a genealogy of the field, moving through both history and disciplines to explain the variant approaches that congealed around Cohen’s terminology: teratology, mythology, and psychology (4). Supported by medieval and classical texts, Weinstock explores both scientific and supernatural explanations for how monsters come to be, moving from “supernatural theories” to “hybridization, maternal impression, accident and what we today would call genetics” (5). In his excursion into mythology a similar duality of both scientific rationale and superstition informs early mythological theories about monsters, from “monstrous races” (14) as culturally misunderstood by early European explorers to “mythical creatures” (17) and “cryptids” (20) falling somewhere between zoology, showmanship, and ignorance. In the last part of his introduction, Weinstock then moves towards psychology and its focus on human behavior and our contemporary understanding of monstrosity as a cultural and political category that can be used and abused for specific purposes.

It is important to note that The Monster Theory Reader is not a handbook on monsters themselves—for that I would recommend Weinstock’s other editorial work The Ashgate Encyclopedia of Literary and Cinematic Monsters (2014)—but an exploration of what cultural impact monsters have on us and how the liminal position they inhabit maps onto different social categories or identities. Theory is the key term here, and Weinstock makes clear in his structure that the 23 previously published essays all comment on specific themes. Under the heading of “The Monster Theory Toolbox,” six essays introduce the basic building blocks of engaging with monster theory. Here, you can find the by far oldest entry in Sigmund Freud’s discussion of “The Uncanny” from 1919. Other well-known essays include Julia Kristeva’s “Approaching Abjection,” and the film theoretical explorations of monstrosity by Robin Wood and Noel Carroll. For science fiction scholars most intriguing in this part is definitely Masahiro Mori’s rarely found critique of near-human replications of the human (for example in digital renderings of humans) in “The Uncanny Valley.” The text is immensely important to understandings of artificial humans and fears of our becoming-machine.

The six essays that follow under the heading of “Monsterizing Difference” each address monstrosity as a tool to marginalize and separate specific groups of people. Accordingly, each chapter addresses the relation between monstrosity and an othered group, separated by religion, sexuality, or race. In terms of science-fictionality, I want to emphasize the essay by Annalee Newitz that addresses race issues in contemporary zombie fictions, which is one of the current discussions of how to address this particular monster: “The Undead: A Haunted Whiteness.” For more on this nexus, an earlier and very similar work to this one in the University of Minnesota Press’ catalogue comes to mind: Sarah Juliet Lauro’s Zombie Theory: A Reader (2017).

The third part of the reader then gives room to seven essays on “Monsters and Culture,” broadening the scope of cultural commentary by including approaches to psychology, religion, terrorism, migration and so forth. Each of these is more concise in topic than the essays in the parts before, and they help to focus on the cultural specificity of monsters, on how they function for unique purposes. Lastly, the reader closes with four essays that move beyond the general understanding of monstrosity and “show us how monsters can be figures not just of fear but of hope” (Weinstock 30). In this last part, then, the science fiction scholar can find explorations of how monsters come to embody posthuman potential and help us embrace otherness—highlighted in essays by Donna Haraway (“The Promises of Monsters”) and by Patricia MacCormack (“Posthuman Teratology”).

In all, the essays collected here for a very reasonable price are perfect for use in college classrooms of both horror and science fiction scholars. Bringing them together in such a well-organized manner and rounding them out with an insightful introduction is an important step to moving the subfield of monster theory into the high cultural critical theory curriculum and should be applauded.

This originally appeared in SFRA Review: