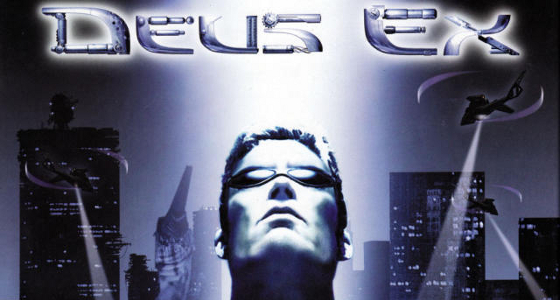 The societies imagined by cyberpunk suggest worlds falling apart and humanity doomed by the fallout from the triumvirate of hubristic science, criminal political self-interest, and ruthless corporate greed. These worlds are ruled by transnational conglomerates, nations are dissolved, and public welfare institutions have evaporated, leaving individuals responsible for their own well-being. In tandem, technology allows humans to reshape body and mind according to these needs: cybernetic augmentation, genetic manipulation, nanotechnology, viral reprogramming and other self-improvement technologies are available to whomever has the money.

The videogame series Deus Ex is set in such a cyberpunk future and focuses on a central motif of the genre: body augmentation and transhumanism. The series combines cyberpunk’s discourse on body modifications and its consequences for both the individual and society with gameplay decisions that enforce these consequences—not in a pre-scripted narrative arc but according to the player’s own ethical decision-making. The implementation of player choice was central to the development of the game as a vehicle for character differentiation, as creator Warren Spector points out. Character development should be designed „to ensure that those character differences would be more than cosmetic“ and provide decisions that affected gameplay, making Deus Ex „a game of problems … all solvable in a variety of ways.“[1]

In the late 1990s, this approach was groundbreaking on several levels. First, it combined elements of traditional genres into a novel format. Deus Ex thus combines the player proximity and fast-paced gameplay of first-person shooters with the reliance on problem-solving narratives of adventure games, and the character development of role-playing games. Second, this meant that the meaning-making process and the ethical positions of the game were not fixed, but rather needed the player’s collaborative participation, as Spector argues: „we’d put power back in [the players‘] hands, ask them to make choices, and let them deal with the consequences of those choices.“[2] One such consequence saw players confronted with different political positions and interpretations. Instead of playing the ‚good guy‘ in the game, Deus Ex sets up an alternative reading, throwing into doubt the justification that the official mission statement provides, as Miguel Sicart argues:

In Deus Ex, ethical thinking is as powerful a weapon as a handgun, and ethical responsibility the most adequate gameplay strategy … Furthermore, the goals and winning conditions were ethically questioned almost from the beginning, forcing players to think morally about the missions and their meaning.[3]

Are players really „doing the right thing“ when they fulfill missions or is someone manipulating them? Central themes of paranoia and political control are explored and linked to the idea of transhumanism. Narratively, the franchise constructs a maze of political, economic, and social futures – based in the pro and contra of transhumanism – that players must navigate.  Each game then sets up a final decision and leaves the ending in the hands of the player. As Sicart points out, the Deus Ex storyline is ultimately an „open ethical design“[4] in that the player’s choice determines the outcome of the conflict.

Regarding the final decision for Deus Ex: Invisible War, media scholar McKenzie Wark argues that the player is faced with four options positioned along two axis: the „question of the boundaries of the body and its other“ represented by the choice between body augmentation or biological purity, and the question of power distribution over access to machines, favoring either „democratic relation, in which all bodies communicate equally“ or „hierarchical, where all communication passes via a controlling power.“[5]  Similarly, the decision in Deus Ex is to allow the destruction of existing power through technology or to pass this power on to either a secret cabal or an artificial intelligence. The most nuanced position on transhumanism emerges in the final decision of Deus Ex: Human Revolution in which players transmit information to manipulate four endings. Each ending represents a political stance on transhumanism: the player can either demonize transhuman modification, glorify it, put it under strict control, or leave it to public decision.

In its insistence on individual decision, Deus Ex rejects any notion of neutrality regarding the politics of transhumanism and associated futures. Whereas in film or literature the position of the author is a guidepost for viewers/readers to orient themselves, the game mechanics of ethical choice introduced by Deus Ex, force player decisions. Since neither option is optimal – each comes with trade-offs, unforeseen consequences, and prices to pay – players must involve themselves in the political conflict, addressing transhumanism, political sovereignty, and capitalist endeavors in order to find their individual position.