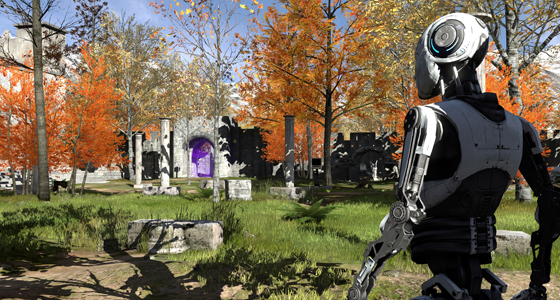 Since their inception, video games as media have been closely entwined with the genre of science fiction, not only recognizable in the thematic proximity of early games such as Spacewar! (1962) but also in the technological development of the medium itself.

The success of the first-person shooter (or better the subjective perspective used in action games) for example has sf to thank for many of its favorite themes and tropes, which led games such as Wolfenstein 3D (1992), Doom (1993), Quake (1996), and Half-Life (1998) to their success, and provided the dominant position that first person perspective has in today’s mainstream games market. The subjective perspective has become one of the most important game mechanics used today and would probably not have enjoyed so much success had it not been for the strange landscapes to be explored and the alien threats to be eliminated that the sf genre presented.

One aspect that yields an interesting analysis of the „productive intersections between SF as a cultural mode and video games as a medium“ (227), as Pawel Frelik put it, might be the evolution of this first person perspective, as showcased in recent years by games such as Portal (2007), Mirror’s Edge (2008), Dear Esther (2008/12) or The Stanley Parable (2011/13). Two independent game developers have made use of the proliferation and variability of the first person perspective in 2014: The Talos Principle by Croa­tian developer CroTeam and NaissanceE by French studio Limasse Five.

The Talos Principle is technically a puzzle-game, in which players are tasked to find Tetris-like sigils in a ruined landscape. In order to do so, they have to explore an antiquity-inspired world, which is nonetheless equipped with highly technological equipment to hinder the player in gathering the sigils. Players will need to use equipment such as jammers and connectors in order to bypass force barriers, guard drones and gun turrets to get to the sigils. These, in turn, allow the player to open new paths to other parts of the world or to receive additional equipment for solving the puzzles. As with Portal, the creative use of the first person perspective is essential to the puzzle designs and players will need to experiment with the limitations, combinations and possibilities of each solution. How everything works is not given in a tutorial but needs to be experienced. There is a disembodied voice, but its instructions are rather philosophical in nature and do not address the game mechanics. Aside from this commentary aimed towards the avatar, the game does not provide a direct communication with the player, but counts on his/her intrinsic motivation to explore the intradiegetic cues for background narrative (such as QR codes and computer terminals with emails and archival information). Players will need to explore the world, traverse it and experience it physically (by moving their avatars) in order to grasp their own being in this world – by doing so, they will discover that they are playing an android and that the game world is a virtual simulation designed to test the cognitive skills of the avatar. The puzzles are symbolic representations of the growing self-awareness of the android AI and within the game, two oppositional forces vie for the player’s allegiance. The conflict between Elohim (the disembodied voice) and Milton (the archival AI of the terminals) enacts a philosophical debate on the concept of free will, on human knowledge and science and on the possibility of transcending human nature and allowing for a future in which humans do not exist.

Similar to games such as The Stanley Parable or BioShock (2007), The Talos Principle in addition opens up a metafictional level of discourse in which the game comments on the constructivist nature of the human experience, connecting the game experience (of simple puzzle solving) with the experience of the world. Which set of rules do you follow? How do you decide if all moral guidance and compass are missing? How is the human experience defined? What parts do faith, knowledge, obedience and free will play in being human? The game mechanics – referring to self-perception (via the first person perspective), individual decision-making (which guide to follow – Milton or Elohim or neither?) and the solving of puzzles (as representative of individual growth and education) – are thus entwined with the message of the game, dealing with human cognition and construction of the world. The topoi of sf – most importantly discourses of posthumanism and the singularity – are shifted from passive consumption to interactive manipulation and experience.

NaissanceE on the one hand also has parts that function as a puzzle game, but larger portions need to be seen as a game of dexterity and exploration (similar to Mirror’s Edge). This makes the experience of the game much more physical for the player (in the sense that you will need hand-eye coordination, delicate movements and perfect timing to master the levels), leading to frustration of less experienced players. The game begins in medias res with a disembodied avatar being chased by a black worm-like creature through a surreal cityscape. Aside from the introductory words „Lucy is lost“ and a few subtitles to explain the controls of the game, no further communication with the player is given. There is no tutorial and no apparent goal of the game, except to explore the landscape and „find a way out“ (whereto is unknown). The traversal of the world and the exploration of the surroundings are emphasized as key to the game. In terms of mechanics, the game thus blends aspects of puzzle gaming – allowing players to manipulate objects such as balls of light, elevators or barriers – and aspects of a dexterity game, in which the traversal of the Labyrinthian world is key and timed jumps between platforms provide the challenge. Both of these aspects do not provide a storyline though, there is no narrative element motivating the movement through the game space – exploration is key. Non-obvious challenges to the game experience are the disembodied nature of the avatar (no bodily limit can be seen, no hands or legs) and the lacking precision of the collision programming – leading to frustrating deaths in the game, when, for example, the non-existent avatar fails the jump.

The central appeal of the game is not its (lack of) narrative though, but the world, which needs to be explored in detail. And it is here that NaissanceE reveals its science fictionality by presenting a specific iconicity in its design. On the one hand, the game reduces its representation of world to the interplay of light and dark, extracting color (for the most part) and concentrating on optical illusions, shadow play and the disorientation of over-exposure to light. In this, there is a scientific reduction in the construction of world that limits the experience to geometry and optics. On the other hand though, the game celebrates form and abstraction of design beyond the scope of reality or practicality, flaunting excess in level design that can only be described as visually science fictional. Players fluent in the visual language of sf will find designs reminiscent of and going beyond that of the high rises in Blade Runner (1982), the CPU architecture of Tron (1982), the subterranean world of Harlan Ellison’s „I have no mouth…“ (1968) or the industrial tunnels and shafts of the death star in Star Wars (1977) – at the end even the desolate and disorienting deserts of Arrakis (from Dune [1968]) or Tatooine (from Star Wars). NaissanceE is an experiment in architectural abstraction – it explores the sf worldliness of industrial vents and tunnels, huge alien halls, inhospitable landscapes and hypertechnologized cities, all of which is made the central novum of the game world.

In terms of player experience then, NaissanceE is challenging at best, if not frustrating for players, especially in its resistance of standardized game mechanics such as a narrative motivating gameplay, a teleology for players to pursue or even a satisfying moment of closure (where the game reminds of Vincenzo Natali’s film Cube [1997]). All of this is an intentional negation of player expectations and a feature of the game, which highlights the geographical exploration of the game space as motivator for play. In terms of sf then, the game needs be understood, as Frelik argues, as an „iconographic archive of science fiction in which signature images […] are not only deployed in various permutations but also literally mobilized and made available to the players“ (233) – the game provides a living canvas of sf imagery.

The variability with which sf video games such as The Talos Principle and NaissanceE appropriate entrenched game mechanics such as the first person perspective and redesign its use, makes clear the expressive potential of the cultural form of the video game. The „productive intersections“ of genre and medium are important starting points for academic inquiry into our understanding of the function of video games beyond a pleasurable reprieve. Similarly, they provide evidence that games are able to blend artistry and message with game mechanic and thus allow for a deeper and more meaningful game experience, as well as pushing the envelope on what encompasses science fiction in the 21st century.

Suvin, Darko. Metamorphoses of Science Fiction: On the Poetics and History of a Literary Genre. New Haven: Yale UP, 1979.